The Boland Stud raised Kiss Of Peace was a champion on the racetrack, and has since become a highly successful broodmare with her daughters continuing the grey’s legacy.

Raced by Mr A K Peer and trained by the late Guy Rixon, Kiss Of Peace was one of just two stakes winners sired by G1 Joe McGrath Memorial Stakes winner Fordham, a son of Forli. Fordham, who was from the same family as successful South African sires Home Guard and Peaceable Kingdom, was a top class racehorse, whose win in the Joe McGrath Memorial (now Irish Champion Stakes) saw him account for Irish 2000 Guineas winner Dickens Hill by three and three quarter lengths. He won three other races, including the G3 Cumberland Lodge Stakes and received a rating of 117 by Timeform, who described Fordham as an “attractive colt, who stayed a mile and a half and was well suited by top of the ground conditions.”

In contrast to her somewhat disappointing sire, Kiss Of Peace’s female side was strong. Her dam Pax Romana, a winner over 1200m, produced nine winners with her three stakes winners including not only a champion in Kiss Of Peace, but also G2 Greyville 1900 hero At The Savoy as well as Grade 3 winner Magnolia King. Pax Romana, herself a half sister to champion sprinters Harry Hotspur and Rotterdam, is also the ancestress of stakes winners Deliberation, Gang Related Horatio and Onehundredacrewood. 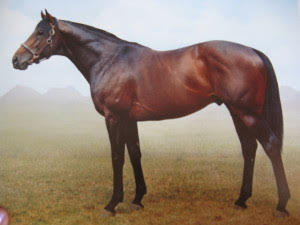 Kiss Of Peace, however, is the cherry on the top of this particular family. The charismatic grey, the best filly of her generation at three, she won eight times from 1200-2400m, with her victories including no fewer than four at Grade One level. In total, Kiss Of Peace won or placed in seven graded races. From the same generation as the top class fillies Love Of London, Mill Hill and Saintly Lady, as well as subsequent top class broodmares Eligible and Luciennes, Kiss Of Peace joined just a handful of fillies to complete the G1 Cape Fillies Guineas (then run as the Bar Valley Classic) and G1 SA Fillies Guineas. Unraced at two, the filly made a winning debut on her first 3yo appearance, when scoring over 1200m. Kiss Of Peace would go on to win five more races that season when she stamped herself as the leader of her generation.

Beaten into fourth place in the G1 Paddock Stakes as a 3yo, Kiss Of Peace came back as a four-year-old to land the Paddock Stakes. She held off the top class Mill Hill to score by half length, with fellow G1 winning fillies Parisian Affair, Saintly Lady and Evening Mist among her 18 beaten rivals. Retired to stud, Kiss Of Peace proved a highly successful (and fertile –she produced 13 foals) broodmare. Her six individual winners included G3 Matchem Stakes winner Mason Dixon (by Foveros), and G2 Gold Bracelet winner Kiss Me Quick (by Caesour) as well as the stakes placed winner Kiss And Fly (by Jet Master). Her placed daughter of Elliodor, Whatsinakiss, is the dam of the G1 Cape Guineas third and Listed Winter Juvenile Stakes winner Kiss Again (by Al Mufti).