The Merry Widow sister a standout at NYS

Eugene Freeman’s Boland Stud has bred a really smart filly in the form of The Merry Widow, who recently picked up the third feature race win of her career when victorious in the Breeders’ Guineas Plate.

Trained by Justin Snaith for owners, the Drakenstein Stud, The Merry Widow came with a late rattle, under in-form jockey Gavin Lerena, to land the 1400m feature by three parts of a length over Hurricane Shelley, with Star Burst Galaxy another short neck away in third.

A daughter of former champion sire Captain Al, The Merry Widow (a small filly with a huge heart) has now won four times (with the majority of her wins coming in features) and won’t stop here!

One of the best 2yo fillies trained in the Cape last season, the three-year-old Pocket Rocket won her first three races on the bounce last season, with The Merry Widow’s victories including both the Listed Perfect Promise Sprint and Listed East Cape Fillies Nursery, and she also finished close up in both the G3 Kenilworth Fillies Nursery and G2 The Debutante.

Her breeder Eugene Freeman says of the filly, “She was a very small filly as a yearling, but beautifully put together and full of quality. “

Boland Stud are thrilled to offer a Master Of My Fate half-sister to The Merry Widow at the 2017 National Yearling Sale (Lot 51). 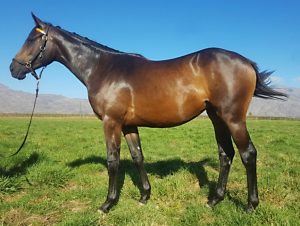 Dam of The Merry Widow and the Master Of My Fate filly (described by Eugene as magnificent) is Jallad matron Miss Kiri who has a 100% strike rate to date, with all four of her runners having won.

The regally related Miss Kiri is a full-sister to former G1 Premier’s Champion Stakes winner Talahatchie and to Leading Dame (the dam of Singapore Champion Lizarre). Lizarre is a son of seven times champion sire Jet Master –the sire of lot 51’s sire, Master Of My Fate.

Master Of My Fate, sire of lot 51, was a top class athlete who won six of just eight outings including the G2 Premier Trophy and G2 Peninsula Handicap. The handsome bay son of champions Jet Master and Promisefrommyheart previously made waves at the 2011 National Sale (he was the top colt sold off that sale) –and now bids to do so once again with his first yearlings in 2017!

Follow this link to see her pedigree and more.