Boland Stud have a number of smart looking yearlings, by well performed young stallions, in their 2018 Emperors Palace National Yearling Sale draft. One of the picks could well be Lot 395, a bay colt by Redoute’s Choice’s top class son Wylie Hall. The latter whose first crop are now yearlings was a top class athlete who finished first past the post in the 2014 Gr.1 Vodacom Durban July.

Wylie Hall’s other notable wins included the Gr.1 Champions Challenge and Gr.1 SA Derby and the son of triple champion sire Redoute’s Choice accounted for some outstanding champions during his illustrious career –including Capetown Noir, Cherry On The Top, Futura, In The Fast Lane, and Majmu (like Wylie Hall, sired by Redoute’s Choice).

Trained by Weiho Marwing, and owned by Micheal Leaf, Wylie Hall won or placed in 15 of his 21 outings and banked more than R3.6 million in prize money.

His bay son on offer here( he has been named Newhaven) is a half-brother to four winners notably Gr.2 Gold Vase/Durbanville Cup winner Grey Cossack. The latter, like Wylie Hall, is by a son of Danehill.

Newhaven’s dam won three and second dam is a daughter of the outstanding broodmare sire Northfields. 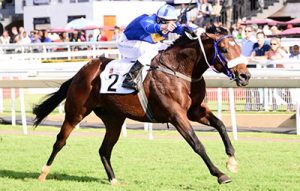 Newhaven is from the same family as Goldene Peitsche winner Celestial Dancer, who was leading Australian sire of winners/wins for eight years!

The full pedigree page and more for Magnificus can be viewed at http://bolandstud.co.za/lot-395-newhaven/